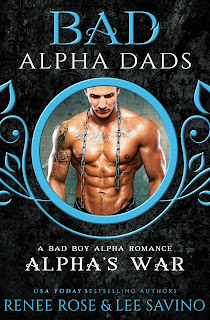 I'm coming for you, Denali...
Alpha's War by Renee Rose & Lee Savino is coming on MAY 8th!
also from the co-branded series Bad Alpha Dads
✓ ADD TO GR SHELF → http://bit.ly/2HwhySm

I’ve survived suicide missions in war zones. Shifter prison labs. The worst torture imaginable. Nothing knocked me off my feet... until the beautiful lioness they threw in my cage. We shared one night before our captors ripped us apart.
Now I’m free, and my lion is going insane. He’ll destroy me from the inside out if I don’t find my mate.
I don’t know who she is. I don’t know where she lives. All I have is a video of her. But I’ll die if I don’t find her, and make her mine.
I’m coming for you, Denali.

They took me from my home, they killed my pride, they locked me up and forced me to breed. They took everything from me and still I survived.
But one night with a lion shifter destroyed me. Nash took the one thing my captors couldn’t touch—my heart.
Somehow I escaped, and live in fear that they will come for me. It’s killing my lioness, but I’ve got to hide--even from Nash. I’ve got to protect the one thing I have left to lose: our cub.
Excerpt:DenaliI still dream of him at night.The deep rasp of his voice. The sense of quiet command, even as a prisoner. The giant bulge of his muscles when he moved. When he shook and sweat above me, his thick manhood filling me, satisfying me.


Sometimes I swear I feel the gentleness of his touch just before I wake. But then I always hear the nightmare voice. The rough snarl of a lion in pain.
Denali, I’m coming for you.

It doesn’t take a psychotherapist to know what the dream means.
I shove back the memories of the lion who marked me, ignoring the familiar twist in the pit of my stomach.
Nash.

Did he ever make it out? Or did he die in there and it’s his ghost who visits me in the night?

Will the guilt over not going back to try to save him ever run dry? Doubtful.
I throw off the covers and pad silently to the kitchen, careful not to make any noise to wake Nolan.

I make coffee and wave through the window at my portly neighbor and landlady, Mrs. Davenfield, who is out early weeding her garden. She’s the reason I ended up settling here.

After I escaped, I stayed off the radar. Took only under the table cash jobs--gardening and migrant farm work. I ended up in Temecula--wine country--working the vineyards during harvest season.

Mrs. Davenfield was willing to take cash and skip the credit check to let me rent the little cottage on her property. She took one look at my swollen belly and decided I must be escaping domestic abuse. I never corrected her, because hell, she seems to love the drama and feeling like she’s my secret-keeper. And I needed her help.

And in a way, I was escaping domestic abuse. Just not the way she imagined it. Not some baby-daddy I had to get away from.

No. Nolan’s father is the only part of my horrifying ordeal worth remembering. I guess that’s why he’s the one who haunts me most.
Because I got away.

And I left him there to rot.
Αναρτήθηκε από Ioanna/Gianna/Nana στις 5:00 μ.μ.