Only 99c/p sale: Angel - an MC romance by Victoria Johns 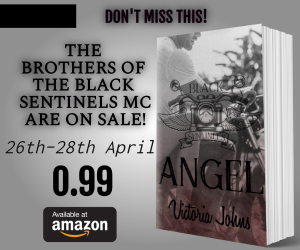 For twenty years Rosie lived a protected life. She was an angel to the men whom she knew she'd wronged. She was the darkness that the Black Sentinel MC didn't know existed.
For twenty years Declan Foster was paying for the sins of others and righting the wrongs done to him growing up.
For twenty years they'd been apart- until now.

With their childhood behind them, the sins of the past are back to haunt them.
She was the Black Sentinels' Angel and he was Wolf, the deadly president of the Carnal MC.
She was untouchable, and he wanted what was his. He would do anything to get her - whatever it took.
Angel, the story of a love that spans two decades and an obsessive hatred that has spanned a lifetime - and someone has to pay.
Add to your TBR: https://www.goodreads.com/book/show/40660968-angel?from_search=true
https://www.facebook.com/victoriajohnsauthor/
Gigi (The Black Sentinels #2) – Available to pre-order:
Amazon UK: https://amzn.to/2Dvyl4F
Amazon US: https://amzn.to/2PpJIzL
#booknews #romancereads #VictoriaJohns #Angel #Sale #booksofinstagram #bookstagram #reading #booklovers
Αναρτήθηκε από Ioanna/Gianna/Nana στις 5:00 μ.μ.