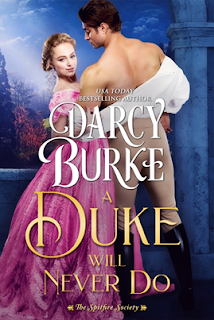 Blurb
From the USA Today bestselling author of The Untouchables series comes your next Regency obsession: The Spitfire Society... Meet the smart, independent women who’ve decided they don’t need Society’s rules, their families’ expectations, or, most importantly, a husband. But just because they don’t need a man doesn’t mean they might not want one.
After failing on the Marriage Mart, Jane Pemberton has two choices: submit to her parents’ edict to marry their boring neighbor or become a self-declared spinster and take up residence in the official headquarters of the Spitfire Society. It’s really no choice at all, and Jane is eager to embrace her newfound independence. She soon finds an unconscious viscount on her doorstep and nurses him back to health. When he offers to compensate her, she requests payment in the form of private instruction of a scandalous and intimate kind.
Having spiraled into a self-destructive abyss following the murder of his parents, Anthony, Viscount Colton, physically recovers under the care of an alluring spitfire. But it is her charm and flirtatiousness that soothes his soul and arouses his desire—until an extortion scheme forces him to face the sins of his past. Now, to save the woman who’s given him everything he lost and more, he’ll have to pay the ultimate price: his heart.
Buy links
Amazon: https://smarturl.it/SPF3amzbt
Apple: https://smarturl.it/SPF3appbt
Nook: https://smarturl.it/SPF3nookbt
Kobo: https://smarturl.it/SPF3kobobt
Add to Goodreads

Excerpt
She glanced at their joined hands. “This is about as close as I’ve ever been to a gentleman. There weren’t any clandestine meetings or walks. I don’t even remember being invited to do anything like that. And you know I haven’t been kissed.”
Yes, he knew that. “Which is a bloody crime.”
Her gaze met his, and heat leapt between them. “Is it?”
“Of the most grievous kind,” he whispered, leaning toward her. He lifted his other hand and gently cupped her cheek just before he lowered his lips to hers. Closing his eyes, he brushed his mouth over hers. The kiss was soft, chaste, and the effect of it jolted through him like lightning.
He opened his eyes in wonder as he stood back. She stared up at him. “Is that all?”
Time stopped for a second, and then he laughed. “For someone with no experience, you know too much.”
“Only because you told me,” she said without guile.
“So this is my fault.”
She arched her brow in a thoroughly saucy, provocative fashion. Maybe she had plenty of guile. “I’d like it to be.”
Αναρτήθηκε από Ioanna/Gianna/Nana στις 4:00 μ.μ.